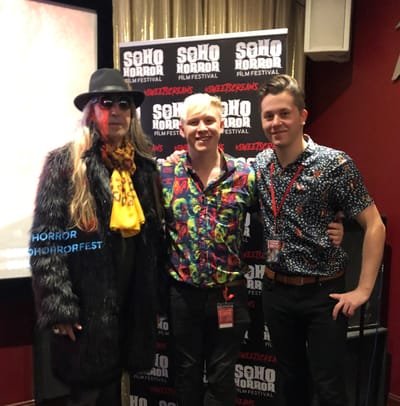 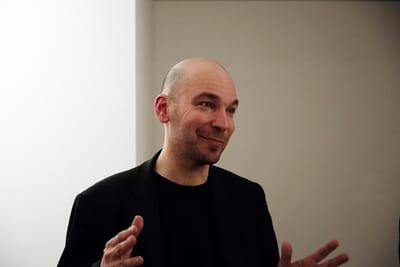 Do go in the basement: the inaugural Soho Horror Film Festival Deep in the bowels of the Karma Sanctum Hotel on London's Warwick Street, something was stirring. Over the weekend of the 10-11 November, a new genre event was spawned, emerging in grotesquely developed form. The Soho Horror Festival is the brainchild of director /producer Charlie Steed, actor/artist Barrington de la Roche and horror expert Mitch Harrod, and its inaugural incarnation boasted 12 features and even more short films, all lovingly curated by Harrod to maximise the eclecticism of a mix that went from fun (Max Groah's Bong of the Living Dead) to extreme (Lucio A Rojas' Trauma) and back again (Rebekah McKendry and David McKendry's All the Creatures Were Stirring). In a showcase so rich and varied, the task of picking favourites is especially difficult - unfair, even - but here are my 'Top Five' shorts and features from the weekend. Short films: 5) Robin Kasparik's I AM THE DOORWAY employs a POV format and trippy sci-fi frame to show mental illness from the inside as a terrifying space odyssey. It is as beautiful as it is disorienting and disturbing. Equal place with Chris Cronin's eerily atmospheric OSCA'RS BELL, in which a father, his son and their pet dog Oscar go a-camping on the edge of the woods, only to encounter a Carpenter-esque predator that wants in on the family. 4) Woods. A campfire. Co-eds. An urban legend. A vengeful slasher. You will know the tune of Anthony Cousins' THE BALLAD OF SQUIRT REYNOLDS, but you might be surprised to hear it set to (diegetic) music and lyrics, and played out with such a knowing sense of gleeful silliness. 3) Joshua Long's POST MORTEM MARY is a throughly creepy piece of Australian period gothic in snapshot, as a mother and daughter who take photographic keepsake portraits of the dead find one little girl determined to cling on to life. 2) In THE HELSINKI MANSPLAINING MASSACRE, Ilja Rautsi's witty feminist update of the Tobe Hooper classic, a horror-loving woman at a crossroads in her life comes crashing into a nightmarish world of old-school male chauvinists, and realises that her boyfriend is a part of the problem. Still, anything can be fixed with the right tools, and there is no trajectory that cannot be reversed in the cause of liberation. 1) In Laurel Vail's WHAT METAL GIRLS ARE INTO, a trio of female friends (one played by the director) face off against their AirBnB host (Matt Mercer!) and his two male friends in a desert cabin. Where the latter are serial rapists and killers - and kinda annoying dicks to boot - the former die as hard as they rock, refusing to play victim to anyone. The ensuing battle of the sexes is a super-smart, ultra-funny reversal of familiar horror tropes, as well as a devil's-horn hand sign raised against misogyny. Feature Films: 5) A desperate romance set in the near-future, Pavel Khvaleev's exquisitely crafted, strange and singular SF INVOLUTION transforms a global apocalypse of bestial regression into a moving elegy of love and loss. 4) In Luke Jaden's festival opener BOO!, a Detroit family is haunted over Halloween not only by supernatural home invaders, but also by the greater curse of its own unresolved mistakes and inner dysfunction. The ending, though at first seeming abrupt, is throughly integral and well sign-posted by everything that has proceeded, and comes with a disturbing honesty about the dire consequences of lovelessness and neglect. 3) A sequel in name only, Mike Testin and Matt Mercer's low-budget, balls-to-the-wall DEMENTIA PART II sees an ex-con handyman (Mercer again!) confronted with every anxiety we have about the elderly as he must clean the pipes of a batty old lady (Suzanne Voss) who keeps confusing him with her late husband, and wants him to satisfy her abiding appetites. In the mirthful mayhem that follows, anything goes, and you won't see it coming. Academy award for Voss, please! 2) If you want to know how you get from De Sica's Bicycle Thieves, via Kurosawa's Yojimbo, to a post-apocalyptic campus satire that is also a sly allegory of America's polarised red-on-blue politics, best watch Trevor Stevens' rambunctious co-ed comedy ROCK STEADY ROW. It is no chore either, with its brilliant mix of action, comedy and lo-fi world-building, and its setting in a run-down university that operates by its own surreal rules. 1) Screening as part of the Festival's Queer Fears Gala, Tilman Singer's LUZ reverse-engineers familiar genre materials to the point where they become nearly unrecognisable in their new and disorienting narrative structure. Shot at a clinical distance, the film observes a session between young Chilean cab driver Luz Carrara (Luana Velis) who has just wandered in a daze into a German police station, and the consulting psychiatrist (Jan Bluthardt) assigned to uncover what has happened to her. In fact the doctor harbours a deeper secret than his patient, and as the hypnotherapy takes hold and the rôle play begins, from a mesmerising confusion of transference and projection there emerges a bizarre love story, transcending time, gender, culture and the rational laws of the physical world. This is a true original, heralding the arrival of a new film-making talent, as fully-formed as the Festival which celebrated him.

2018 Audience Awards We thank everyone for voting so dilligently and incisively across the weekend, and it was wonderful to see such a varied but consistently positive response to our selections. The votes have been tallied and verified, and our 2018 Audience Award winners are as follows: -SHORT FILMS- Bronze - WHAT METAL GIRLS ARE INTO Silver- OSCAR'S BELL Gold- MONSTAGRAM -Feature Films- Bronze- VIDAR THE VAMPIRE / TRAUMA Silver- ROCK STEADY ROW Gold- DEMENTIA PART II